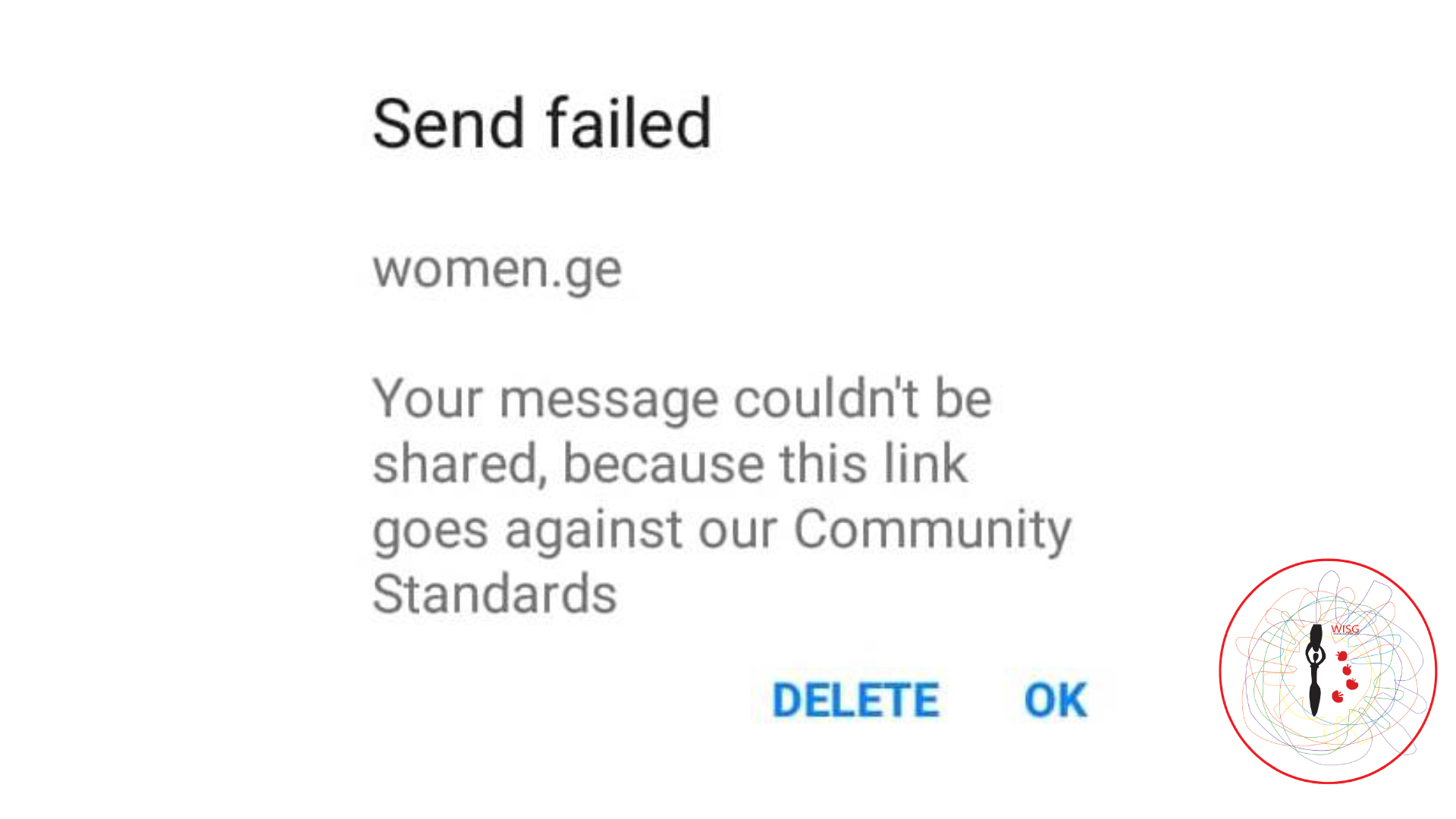 A cyber-attack has been carried out against the Facebook page of the “Women’s Initiatives Supporting Group” (WISG), allegedly by extremist homophobic groups. As a result, Facebook has removed several of WISG’s videos and at the time of the writing of this article, it is impossible to share any content from the organization’s website on social media. We believe that the well-mobilized extremist attacks commenced after news about the “Queer Sisters Run” held on May 12th spread via several online media platforms.

Video episodes from the feminist media library, uploaded to WISG’s Facebook page several months ago, have also been removed. One of the episodes focuses on the history of anti-gay movements in Georgia, reviewing how the different parties – the state, the church, extremist groups, and, in recent years, pseudo-supporters associated with various political actors, benefit from LGBT activists’ struggle to claim public space.

Several episodes, uploaded in November and December 2018, expounding upon transgender and intersex issues in various cultures and religious across the world, have also been deleted.

The video episodes are available in full on WISG’s YouTube channel.

Given the anonymity of Facebook reporting, and the fact that page administrators have no access to information on the identity of the perpetrators, the time the reports were made, grounds upon which they were made, their frequency or number, we only learned about the cyber-attack after our Social Media Administrator, while uploading content to WISG’s Facebook page, discovered that the media library episodes were “missing” from the video section. Attempts to share this content on private pages generated a message that the content was “unavailable” and that it was in violation of Facebook’s Community Standards.

We believe that not only the episodes described above were/are being actively reported, but also the organization’s entire Facebook page, as well as links shared on Facebook from WISG’s webpage were/are also being targeted. This has led to Facebook labeling the domain names wisg.org and www.women.ge as a threat. This was noted by WISG staff while attempting to share content from these pages through Facebook Messenger, which blocked the titles citing the same violation of Community Standards.

At the time of the writing of this article, Facebook continues to prevent us from sharing content from our official webpage.

When posting videos on the platform, Facebook automatically reviews content before publishing in order to monitor for violent material or that which goes against its Community Standards. If suspicious material is detected, Facebook blocks the uploaded content and does not publish it for audiences.

After being uploaded by the page admin, all of WISG’s video episodes had gone through the official validation process, had been approved by the platform, and had become accessible to the audience. As per the latest statistics, each of the videos had over 10,000 views.

However, it must be noted that Facebook’s content monitoring system is essentially faulty and the platform is unable to react effectively. There is an increasing volume of complaints and information about how various extremist and Nazi/white supremacist groups actively exploit the platform on a global scale.

For instance, several days ago, BBC reported that Facebook has been accused of automatically generating extremist content. The platform was not only unable to identify and eliminate extremist content proliferated by al-Qaeda pages and active Nazi/white supremacist groups, but it even created new content for these groups by auto-generating “celebration” and “memories” videos generally produced when a page or its content accumulates a large number of views and “likes”.

Facebook’s management issues apologies on a near-daily basis and claims that they are actively combatting so-called “fake news” and “fake profiles” – bots, generated by the vast army of extremists and politically motivated groups. Nevertheless, it is a fact that the system has been unsuccessful in controlling hate speech, violent content and deliberate misinformation that is being spread through the platform.

Pages and groups with many thousands of members that continuously distribute racist, anti-feminist, homophobic, and white supremacist content and incite hate and violence are also not a novelty for the Georgian Facebook scene.

Queer and feminist groups constantly try to report such pages and content. We are also well aware how actively these groups have been mobilizing in recent years, especially in the month of May, spreading waves of hate and aggression towards queer people. Moreover, these groups undertake reciprocal reporting via the mobilization and engagement of thousands-strong groups.

During such times, Facebook should serve as an arbitrator, on the one hand – monitoring the content of uploaded material, and on the other hand – assessing the reasons for reporting content.

However, our recent experience is yet another example of the fact that the system is unable to effectively monitor and curb content distributed by extremist groups on the one hand, and on the other – investigate content reported by such groups.

The platform responds efficiently only when the number of reports is high and the reporting takes place in an organized and active manner. Thus, Facebook effectively places queer, feminist and other groups fighting for social justice in the same position we were in when, as a small group of queer activists gathered in front of the Georgian Parliament on May 17, 2013, we faced an enormous aggressive mob of violent attackers.

Last year, on May 17, when, due to that same mobilized aggression, queer community organizations were forced to cancel a pre-announced rally marking the International Day against Homophobia, Biphobia and Transphobia, WISG announced an online campaign, which entailed activists and supporters symbolically “checking in” at the Parliament of Georgia. The idea fell through due to yet another active cyber-attack against WISG’s website, which resulted in the organization’s page, as well as the private accounts of several of its administrators being blocked for several hours.

In connection with the incident on May 12, WISG has already submitted a detailed message to Facebook via its feedback form. We are, however, unaware whether the message will produce any tangible result when it is clear that Facebook is unable to effectively handle the enormous flow of information via its own platforms, or the increasing number of complaints about the inefficiency of its operation and monitoring mechanisms.

The Women’s Initiatives Supporting Group is reaching out to cybersecurity experts and attorneys to commence legal proceedings against Facebook, the basis for which, we believe, may be Facebook’s condoning of extremist groups in disseminating homophobic hate speech and interference with activist groups fighting for social justice.