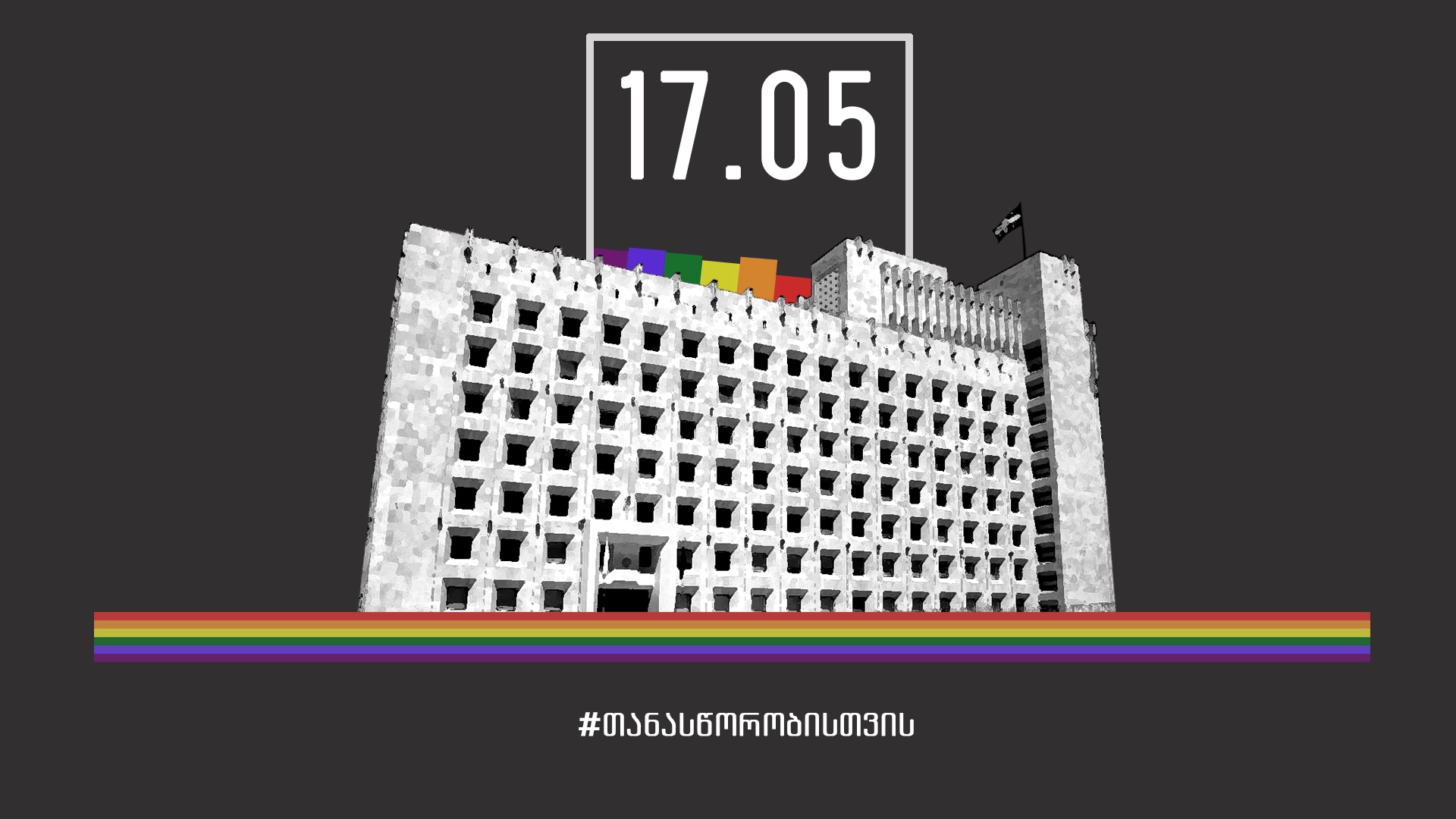 To LGBT community members, citizens of Georgia and the international society, human rights organizations and the diplomatic corps. To the Georgian government, Patriarchate of Georgia, the governing party, and the opposition, politically engaged groups and fascist groups operating illegally in Georgia.

17th of May is the International Day Against Homophobia which is celebrated by the LGBT activists, our allies, friends and community members, who consider this day to be important in terms of fighting hate and aggression – this general inequity.

As you already know, we witnessed horrific events in 2013, when dozens of peaceful demonstrators, who had gathered to celebrate this day, were ravaged by the Georgian Patriarchate and the members of the counter-demonstration, organized by questionable political forces. Considering the power ratio, each of our lives was at risk, but sadly, nobody thought about this. A number of the counter-demonstrators was reaching tens of thousands. That day marked itself not only in our lives but in the history of civil society. Ever since, on the 17thof March, we’ve been trying to practice our constitutional rights to peaceful assemblies and demonstrations. Sometimes we’ve managed, in some cases, we haven’t and sometimes we have done it partially.

During this year we’ve had several meetings with the Ministry of Internal Affairs and they declared their readiness to guarantee our safety.

However, We haven’t failed to notice recent political events and social tension following Tbilisi nightclub raids. The demonstration was escalated because the city’s main avenue was occupied by not only peaceful demonstrators but also by an uncontrolled unlawful neo-nazi group. The government had to put unprecedented efforts into holding back several hundred destructive citizens, who were even tearing the trees apart. Fortunately, everything ended peacefully and the expected confrontation was avoided thanks to the appropriate and responsible actions of the organizers who decided to discontinue the demonstration.

As we all know, for this year’s 17th of May, opposing groups have mobilized their powers, these groups include the Patriarchate of Georgia and fascist groups that, according to reasonable claims, are linked to intelligence agencies of Georgia’s political enemy – Russian Federation.

We have a well-grounded suspicion that these forces are unprecedentedly mobilized to start a mass chaos and a civil confrontation in the city for the 17thof May. It was brought to our attention that no matter how much we’ve tried to avoid organizing our activities at the same time and location as theirs, they overlapped the times and locations of their events with our demonstration. Considering recent events and general tension, all of this enforces chaos and confrontation, which can cause unforeseen destructive results for our society. Since the 90’s, Georgian people have seen what xenophobia and rivalry can bring to society. We don’t want our country to be dragged into the civil war once again.

Having understood the real existing dangers, we, LGBT activists made a tough, joint and consolidated decision for this occasion to give up our constitutional right to freedom of expression and cancel our 17thof May demonstration in front of the Chancellery of the Government of Georgia to avoid helping the interested parties in provoking social disorders.

Since 2013 till this day, Georgian government have had five years to take care of the homophobic and unequal social environment if they really wanted to. Instead of this, a group that poses a huge threat to our county’s statehood and cooperates with foreign special forces rose to power. The steps that country took to improve its legislation, including the anti-discrimination law, are mostly inefficient. In addition, representatives of different government branches constantly encourage homophobia, xenophobia and rivalry with their public statements.

Instead of the fact that the government, opposition and other political forces were functioning in everyday regime and worked for us on the unhealthy problems faced by the Georgian society: unemployment, poverty, education system, air pollution or territorial integrity, we are still faced by continuous attempt to promote hate in society towards marginalized groups and to draw attention away from the real problems. Moreover, we believe that the strengthening of fascist groups in the country is a direct result of the state’s indifferent and irresponsible social policy.

We urge the Georgian authorities to realize their political responsibility in forming ultra-right, radical violence groups in the community, as well as their political goals and financing sources.

We urge opposition parties and political groups to immediately stop the methods that they have used to weaken the public and to gain and maintain power. Give up their own narrow party interests – at this stage of public peace and long-term prosperity for the well-being of the citizens.

We urge the Patriarchate and fascist groups of Georgia to stop promoting hatred and attempts to create a civil confrontation.

Most importantly, we urge the LGBT community, our loyal supporters and friends, every citizen of Georgia, our brothers and sisters, to give politically motivated groups the right to spend time with each other instead of manipulating us and to focus on the real problems. We are not enemies of our country and society, we are people who support the development, peace and mutual respect towards citizens of this country.

We are grateful to every citizen of Georgia who believes in us that building a society based on public peace and equality is our primary goal and challenge.