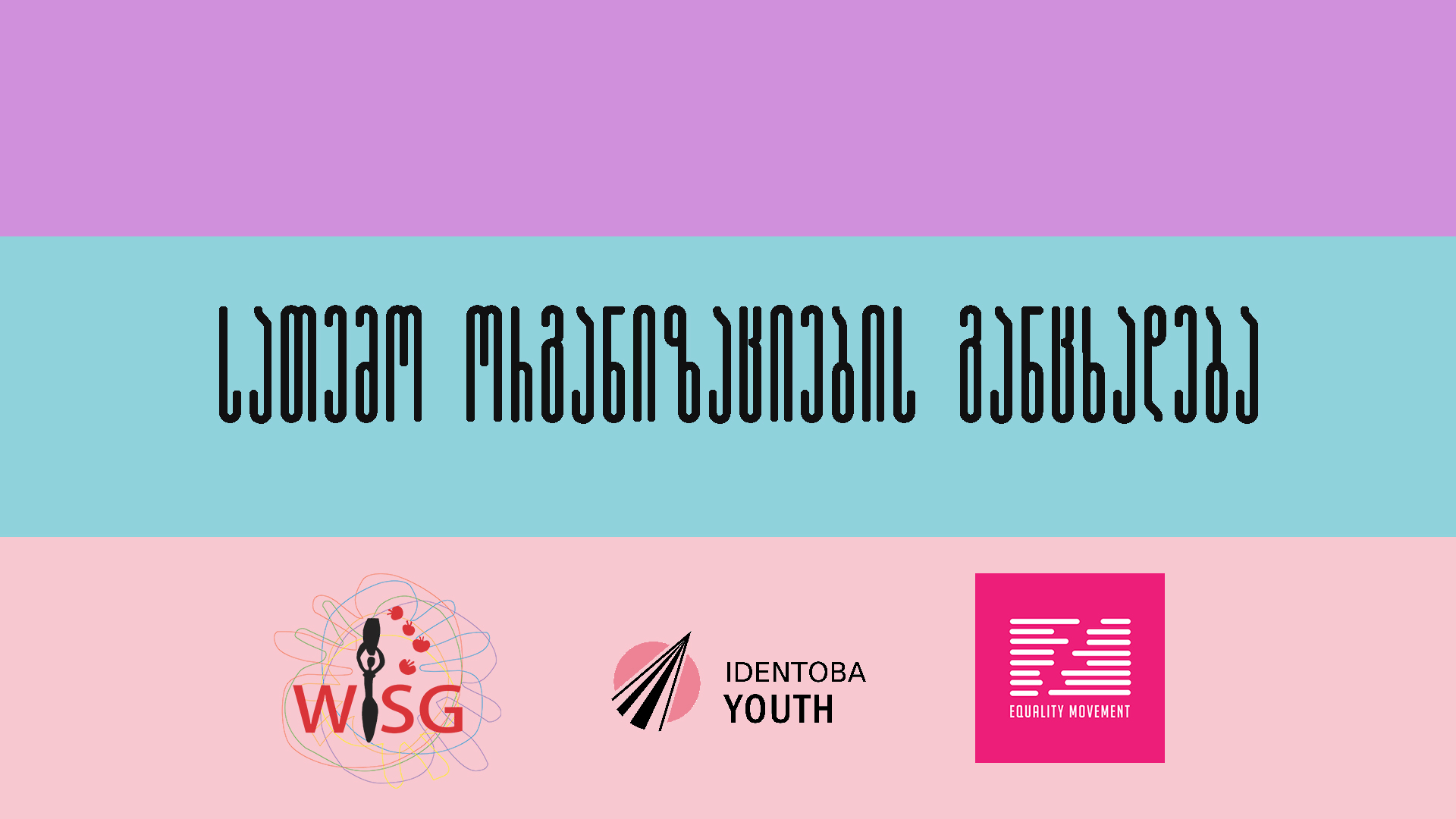 The economic, social, and healthcare challenges facing the transgender community in Georgia have become utterly critical in the context of the Covid-19 pandemic and related state of emergency. Throughout this period, community-based organizations (CBOs) have been working intensively, in compliance with standard healthcare recommendations, to adapt to the crisis and introduce new programs that would counterpoise the current challenges facing our community. At the same time, we are constantly confronted by destructive processes and the instrumentalization of the community’s issues, encouraged by external actors (politicians, the media, faulty public services). These circumstances make it doubly difficult to operate in the given social crisis and, consequently, to advocate for the interests of the community.

We continue our work having mobilized our efforts to the maximum possible extent and do not intend to give up our position in order to conform to an agenda forged by various politically inclined groups. We thus consider it essential to publicly challenge these counterproductive measures and assess current developments.

The April 30 incident was broadcast live by several TV channels in complete violation of the ethics and standards of journalism. As expected, the incident was covered through the lens of media sensationalism and political populism.

We would like to point out that assessing the incident as an “extreme form of protest” contains certain risks. This labelling encourages the affirmation of such actions. Community-based organizations recognize the dangers of such labelling and urge the government, media outlets, individual activists and the public to refrain from indirect incitement to self-destructive actions.

Another concern is that government officials, whom for many years we have been equipping with various sources of evidence-based information (studies, international expertise, local experience) about the specific needs of transgender persons, and who have yet to express political will to take appropriate measures, have come forward with populist and superficial statements only after a trans* woman’s attempted self-immolation.

In doing so, those bearing political responsibility have once again reaffirmed to the public their utter indifference to proposals that have been communicated to them over the years via policy documents, recommendations and essential points to be included in the government’s Human Rights Action Plan. They have, instead, proceeded to issue perfunctory feedback only in response to cases such as the one described above. With this reactionary step, they have once more confirmed that the Georgian state lacks the political will to proactively improve the situation of various socially oppressed groups through humane and civil means.

The chair of the Human Rights and Civil Integration Committee of the Parliament, Sophio Kiladze responded to the incident via a post on her social media page. Ms. Kiladze urged transgender people to contact local authorities or reach out to her personally with their grievances.

This statement is problematic in multiple ways. The information shared by Ms. Kiladze is erroneous and does not reflect the reality lived by transgender persons; furthermore, it largely downplays the problems faced by the community.

The suggestion to address local authorities is not a relevant solution to the problem because, in the case of transgender persons, the very act of addressing these agencies can lead to a number of difficulties.

Most transgender persons have been legally deregistered from their places of residence by authorised family members due to family conflict, rejection, or domestic violence. As a result of limited support networks, they are unable to obtain new addresses of registration. The vast majority of community members hold identification cards that feature no addresses or have addresses that do not correspond to their actual places of residence.

Humanitarian assistance provided by local authorities mainly includes food and basic hygiene items. Furthermore, it is impossible to issue the aid packages remotely, and there is no voucher-based or other flexible system to facilitate access[1].

Transgender persons are also unlisted in the database for the socially vulnerable. Some have an income under regular conditions, and consequently have no need to be entered into the database. Those who do have this need are frequently still not registered in the database due to the following several reasons: 1) frequent change of residence; 2) different sex marker indicated in the identification documents and a fear of discrimination and oppression by social agents; 3) bank debts and having the debt amount reflected on their bank account; 4) the fact that the majority of the community members are able to work and do not have disability status or other vulnerability indicators; hence, the probability of their inclusion in the database is very low.

The only concessions provided by the national anti-crisis plan that the trans* community could benefit from were utility subsidies. Most trans* community members are not eligible for the 6-month 200 GEL per month allowance since they were not previously employed in the formal sector. Lastly, it is difficult to determine, whether trans* persons will be eligible for the one-time assistance in the amount of 300 GEL allocated to self-employed individuals, since a relevant web resource has not yet been launched and it is unclear how self-employment status will be documented for these purposes.

Sophio Kiladze’s statement points to a lack of efficient coordination between the Human Rights Committee and the Inter-agency Coordination Council, given that since the inception of the state of emergency, communication between the Council and CBOs has been limited to the provision of the one-off humanitarian aid.

The fact that state agencies are not truly concerned with the situation of the LGBTI community and perceive the needs of community members only superficially has been clearly demonstrated by the fact that this one-time small-scale assistance was available only to residents of the capital. The needs of LGBTI community members living in the peripheries have not only been overlooked, but their very existence has been denied.

Against the backdrop of the crisis, it is evident that the state must immediately satisfy the basic economic and housing needs of the community; however, combatting structural and systemic homophobia and transphobia requires much more in-depth and consistent political work.

The chair of the Human Rights Committee has nevertheless made no mention of the proactive steps that the government should take. It is because the authorities have been neglecting the question of legal gender recognition that Georgia is currently the defendant in a case concerning transgender citizens lodged with the European Court of Human Rights.

Legal gender recognition is seen as a mechanism enabling trans* persons to attain state-backed recognition of their gender identity in a swift, transparent manner without significant financial costs. The development of such a mechanism under current conditions requires both legal and administrative regulation.

For years, CBOs have been advocating for the establishment of an administrative mechanism, according to which, trans* persons, having been diagnosed with “transsexualism” (F64.1), would be able to change the gender marker in their identity documents. However, as of 2018, such a diagnosis no longer exists, and it is impossible to introduce a similar mechanism exclusively at the administrative level, even within the system of the Ministry of Justice.

In addition, we must take into account the fact that the legal gender recognition mechanism should be put in place in such a way that the change may be applied not only to primary identity documents (e.g. ID card and passport), but also to financial, medical, educational and other records. Otherwise, persons utilising this mechanism may continuously experience transphobic abuse in the hands of various institutions and officials.

No less problematic is the fact that the superficial and one-dimensional assessments made by select media outlets, politicians, and human rights defenders are fully consistent with the government’s irresponsible attitudes; some claiming that “there are only 50-60 trans* people living in Georgia”. Turning trans* people into a statistic and the assertion that this figure reflects the total number of trans* persons living in Georgia is offensive, dehumanising and further marginalising for those trans* and non-binary persons who are unable to disclose their identity and who cannot access even a basic support network.

Community-based organizations seek to emphasize that the information provided to government agencies about the needs of 50-60 transgender persons encompasses a very small part of the trans* community. This statistic is just an indication of the trend and must in no way be taken to reflect the full picture.

In view of the above, the community-based organizations call on:

The undersigned organizations acknowledge the significance of the “do no harm” principle in implementing inclusive social policies towards LGBTI persons and urge all actors involved in the process to take adequate responsibility for the risks associated with such precedents. It is inadmissible to consider self-destructive actions as a form of activism and a way to achieve objectives. The neutralization of feelings of hopelessness and despair within the community should be accomplished via systemic change, rather than reliance on reactionary and superficial statements in response to single incidents. The security and life of every citizen, including LGBTI individuals, are themselves the objectives of queer politics and should not become the means to achieve change.

[1]In order to receive the humanitarian aid package, F.K. (initials have been changed) applied to Poti City Hall on May 4, 2020. The person in charge of issuing the packages, who represents the City Hall’s Department of Health and Social Affairs, registered the citizen’s application, however, due to the fact that the applicant did not meet the predetermined eligibility criteria, F.K. was not redirected to any other humanitarian aid program.