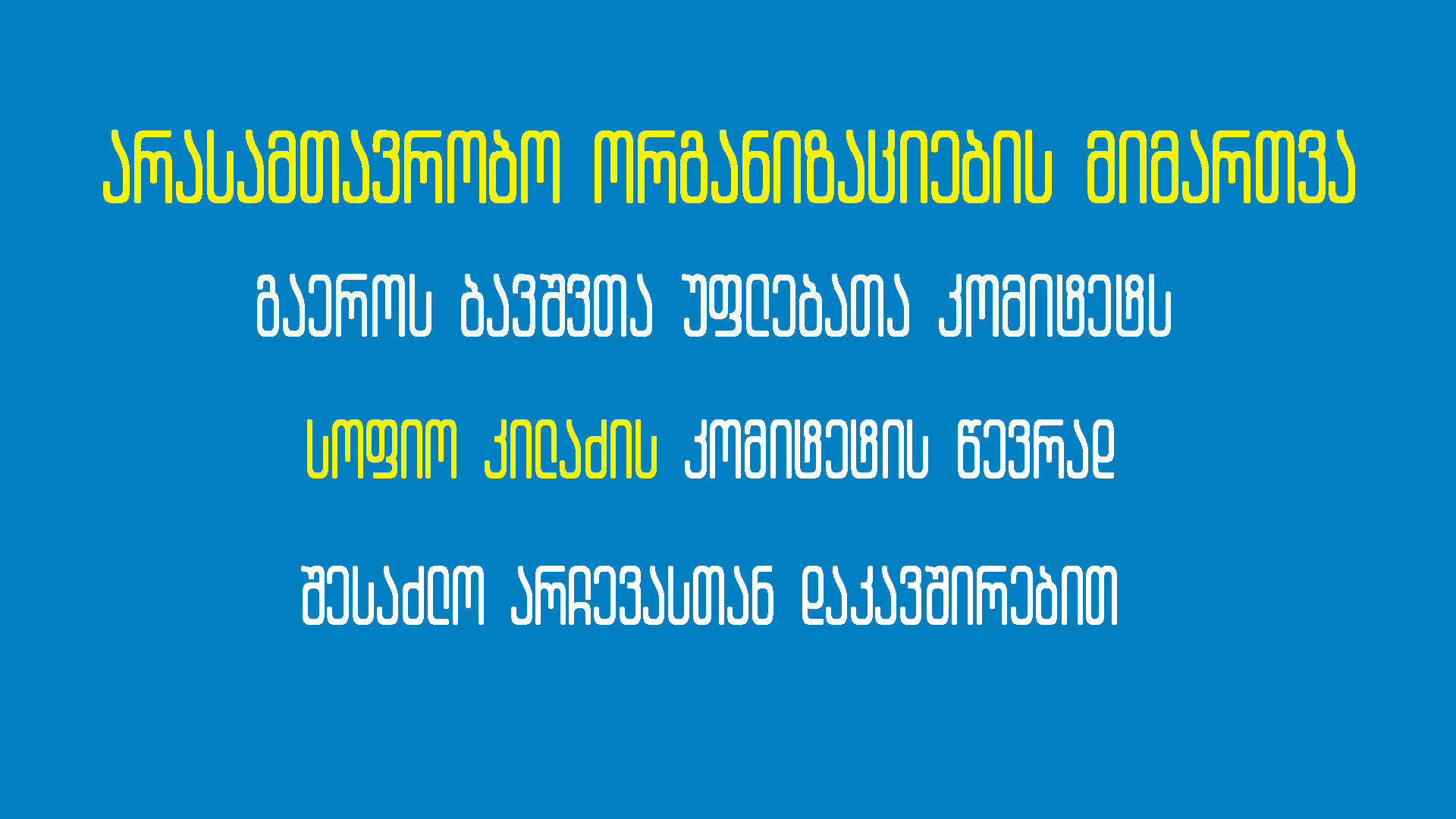 In the second half of 2020, the United Nations Committee on the Rights of the Child (CRC) will elect nine new members at the eighteen session (Conference of States Parties to the Convention). The States Parties shall select and nominate candidates to the Committee in an open and transparent manner. Georgia has nominated Sophie Kiladze, Chair of the Human Rights and Civil Integration Committee of the Parliament of Georgia, as a candidate for the CRC membership.

We, the undersigned organizations, underline that the state ignored the UN recommended selection procedure when selecting the candidate for the CRC membership and nominated Ms. Sopio Kiladze who does not represent for strong belief and respect for equality and human rights. Ms. Kiladze during her tenure as the Chair of the Human Rights and Civil Integration Committee has on numerous occasions demonstrated homophobic attitudes and selectivenessin supporting human rights, especiallythe rights of minority groups. We, the signatory organizations believe that the parties casting their votes should be aware of the civil society position before making a voting decision.

We strongly oppose Ms. Sopio Kiladze’s, Chair of the Human Rights and Civil Integration Committee of the Parliament of Georgia, election to the CRC. Her qualifications, reputation and open disregardof human rights, as well as her nomination taking place with obvious disregard of the recommended processes[i] do not hold up to the high standard essential for this position and her legitimacy.

Violation of the principles of openness and transparency of the selection procedure. The United Nations follows the procedure and principles of openness and transparency in the selection of candidatesand for this purpose the CRC considers that it is essential to ensure public calls for nominees that will encourage all interested candidates to participate in the competition. The United Nations demandsholding an open competition and sets a requirement for selection of the candidate who meets the high moral standards and has competence and experience in thespecificfield. Unfortunately, the Government of Georgia(GoG) did not follow this recommendation and SopoKiladze was selected as acandidate for the CRC membershipsecretly from the civil society. Moreover, the GoG did not even publicize the information about the beginning of the selection procedures. This information was not disclosed to civil society organizations (CSOs). The civil society obtained information about the nomination of the candidate from the official website of the High Commissioner for Human Rights after the candidate had been nominated. Due tosuch non-transparent and secretive selection process no one else was considered for the position.

Ms. Kiladze's resume states that she is the author of the large-scale countrywide campaign for promotion of children's rights and solidarity. In fact, three events (one per year) were held with the participation of Ms. Kiladze. Unfortunately, these one-time measures cannot be considered as the evidence that Sopio Kiladze has relevant expertise in the field of child rights.

Avoidance of conflict of interests and violation of the principle of candidate independence. This recommendation has also been ignored by the state. There is a conflict of interests regarding Sopio Kiladze and therefore, she cannot be considered as an independent candidate. Sopio Kiladze is currently member of the parliament. She held this mandate during the selection process too. She did not relinquish her MP mandate and due to this fact, she cannot be considered to be an independent candidate. Also, she is a member of the ruling political party and the member of the political council of the Georgian Dream – Democratic Georgia.[iii]

Violation of the reputation requirement and relationship with the civil sector. The candidate nominated by the state is notoriousfor open and blatant confrontation with the civil society. She has verbally abused human rights defenders, confronted human rights activists and demonstrated homophobic and discriminatory attitudes in her public statements. Most recently, she has called for introduction of militaristic principles in children’s education and development curricula. [iv] She has repeatedly demonstrated negative attitude toward the LGBTQI community. These facts have been described in the reports of various international and local organizations and have been widely covered by media outlets. Due to these very attitudes demonstrated from the floor of the parliament and at other fora the civil society had toresort to many forms of protest against her.[v]

The civil society sector considers that the CRC plays an extremely important role in the development of children’s human rights standards. Therefore, the representative of the country must serve the interests of children of his/her country as well as children of all State Parties to the Convention honestly, independently, and professionally. In addition, it is essential to pay particular attention to the candidate's reputation and attitude towards the civil sector. Democratic values ​​and the protection of the rights of minorities, especially protection of the best interests of minority children, including the LGBTQI community, children with disabilities, ethnic and religious minorities, should be paramount for the candidate.

We, the undersigned organizations (52 organizations), would like to request you to take into consideration this critical assessment made by civil society organizations, local and international organizations in the election process of the CRC members and not supportelection of Ms. Kiladze to this position.

Please feel free to contact us in case you require any further clarifications or evidence.

[v] The Coalition for Equality responded to Sopio Kiladze's discriminatory and homophobic statement that she was not going to protect sexual minority representatives and believed that it was up to her to decide whether to protect sexual minority representatives or not. It triggered a large protest in the country.-https://bit.ly/3cNY5YWhttp://equalitycoalition.ge/article/25; https://bit.ly/2YqQmee;

Sopio Kiladze illegally restricted the freedom of expression to a member of the LGBTQI community on her official Facebook page, which was eliminated during the period ofcourt dispute. -https://ghn.ge/news/217222?fbclid=IwAR338e2UEw1JlykcnCRC2W_4eCPzlCuM8NvBFHG4iFicDBsUs9gkrW-3Oew;

Sopio Kiladze uses hate speech against the LGBTQI community, which has repeatedly been criticized by the public. Due to this fact the civil society demanded her resignation from her position as the Chair of the Parliamentary Committee on Human Rights and Civil Integration. -https://bit.ly/2BLMsVm; https://bit.ly/30sjaFN;

The Partnership for Human Rights (PHR) filed a complaint against Sopio Kiladze alleging violation of the ethical norms of a member of parliament in order to discuss the violation of ethical norms by the MP. -https://bit.ly/3hdvhfF;

The Human Rights House functioning in a number of countries responded to Sopio Kiladze's attack on human rights defenders. -https://hrht.ge/en/defamatory-and-degrading-statements-towards-human-rights-defenders-by-the-chair-of-the-human-rights-committee-are-alarming/;