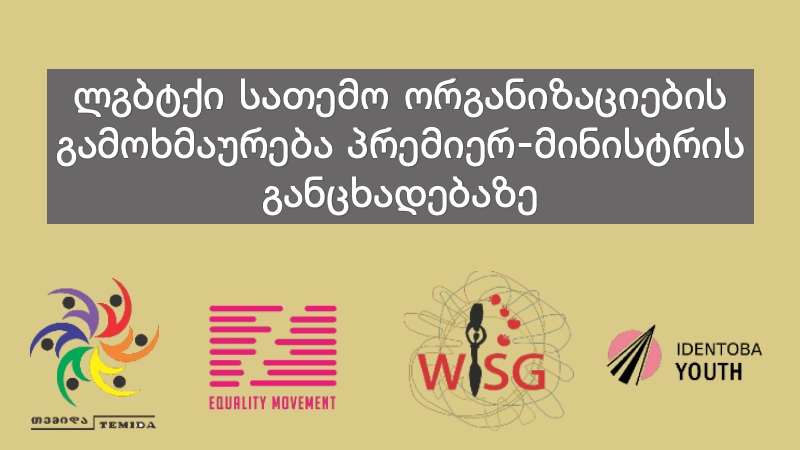 With this statement, we, the members of the queer community and community-based organisations, are responding to the anti-constitutional remarks of the Prime Minister of Georgia [1], which serve to label us along party lines, instrumentalise and exploit us in the name of retaining power.

The Prime Minister’s speculative assertion that the queer community is a culturally and politically homogeneous group, backed by opposition parties, is untrue. Queer people are members of society, harboring different political views, and no political choice allows to legitimize violence.

The Prime Minister has publicly denied the ruling party’s accountability for the attack on journalists and queer people in Tbilisi on July 5, and avoided taking responsibility for the violation of the right to peaceful assembly and manifestation perpetrated by violent groups against the March for Dignity planned by “Tbilisi Pride”.

Appealing to the will of the majority [2] is a legitimization of totalitarianism and not only endangers queer people, who have already been largely targeted and persecuted by violent groups, but also constitutes an obvious and direct call for the suppression of the voices of minorities. This statement contributes to the deepening of civil strife, unequivocally sanctions violence, is a threat to all citizens of this country, and undermines the constitutional and democratic order and civil peace.

Through this position, the Georgian government deliberately maintains the previous’ government’s homophobic policies, makes a false interpretation of the needs and concerns of the queer community, and instills hatred to suppress societal disputes.

We, community-based organisations, categorically oppose such an interpretation of our activities. We have for years been combatting attempts at manipulating the queer community and once again declare that today, based on this very speculation, all political forces, as well as the Patriarchate of Georgia, are attempting to consolidate their power, uphold the social polarization agenda, and take away our agency in this social process.

The cycle of violence taking place against journalists and queer people on July 5 and over subsequent days was authorized and encouraged by the Government of Georgia, which failed to ensure due diligence in identifying and penalizing the organizers of the atrocities, prevent the transgressions and provide for the rehabilitation of the survivors. The failure to preclude this brutal violence and the encouragement of civil strife is a direct responsibility of the government.

[2] Quote from PM Gharibashvili’s statement: “Ninety-five percent of our population is against holding a demonstratively propagandistic parade or march. Friends, we should all comply. This is the viewpoint of the absolute majority of our population […] It will no longer be the case that the minority decides the fate of the majority, when any decision in Georgia used to be taken with their mark of violence.”