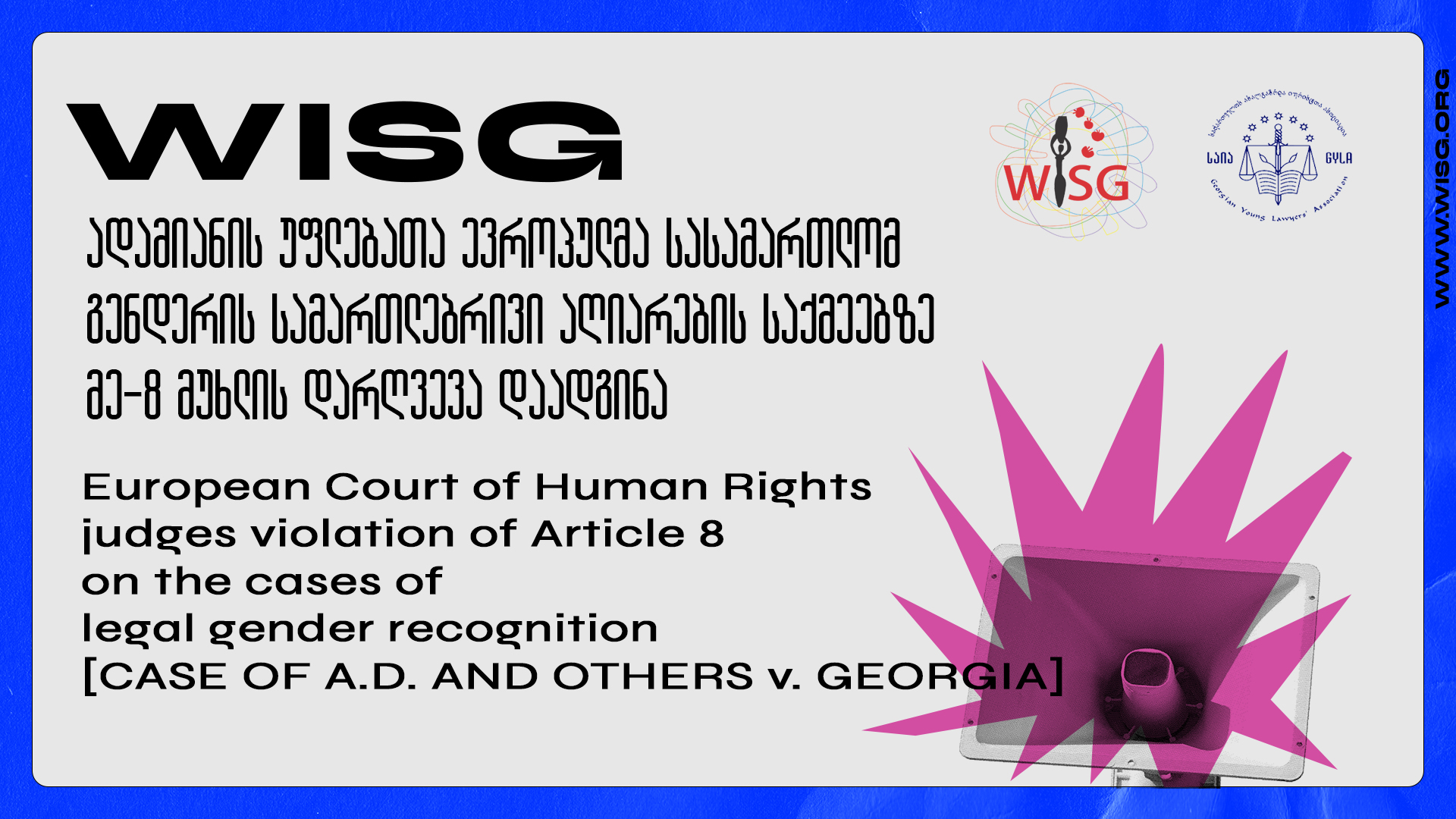 The European Court of Human Rights explained once again that regarding the right to protection of private and family life, in the case of the right to gender identity, the state should act within the narrow limits of free assessment. The European Court emphasized that Article 8 of the European Convention on Human Rights obliges the state to provide fast, transparent, and accessible procedures through which it will be possible to change the registered gender marker.

The court did not explain in detail what this procedure should be, although the policy document prepared by WISG, taking into account international standards, explains that "expedited mechanism" refers to a procedure that ensures the shortest possible interval from the filing of the application to the change of record. The mechanism will be considered transparent if the law clearly regulates the procedure for changing the record of name and gender, including which agency interested persons should apply to. Accessibility of the procedure focuses on a more practical aspect and implies the elimination of barriers that may be related to a person's health, age, or limited ability. The issue of accessibility also refers to financial accessibility, which cannot become a barrier for a trans person.[5]

According to the court's explanation, "the main problem in the present case is that it is completely unclear what the legal regime of sex/gender marker change is actually in Georgia." In particular, despite the fact that there is a provision in the domestic legislation that allows the change of a person's sex or gender marker in civil status records (paragraph "z" of Article 78 of the Law on Civil Acts), the law has a gap regarding the requirements and prerequisites (including medical) that must be fulfilled in order to implement the legal gender recognition)[6]. At the same time, the court emphasized that the main problem is the unanswered question from the state and national courts: what medical procedures were necessary for the legal gender recognition.

For the European Court of Human Rights, the position of the Government of Georgia was not clear, according to which sex change should be evaluated by "biological, physiological, and/or anatomical criteria," in light of the fact that there are no legal definitions for this. The court pointed out that the use of these terms requires great care and precision, as each of them leads to different legal consequences. The European Court explained that, for example, if sex change is to be assessed by biological criteria, then it will never be possible to legally recognize or change gender because genetic sex cannot be changed medically.

Based on all of the above, the court concluded that "the absence of clear legal bases leaves decision-making bodies with wide discretionary powers, which creates the risk of arbitrary decisions when considering applications for legal gender recognition."[7]

GYLA and WISG continue to monitor the enforcement of these cases, both at the ministerial committee and at the national level.

GYLA is conducting this case with the support of the USAID Rule of Law Project.

[2] Their cases were considered anonymously by the court due to the severe homophobic and transphobic situation in the country.