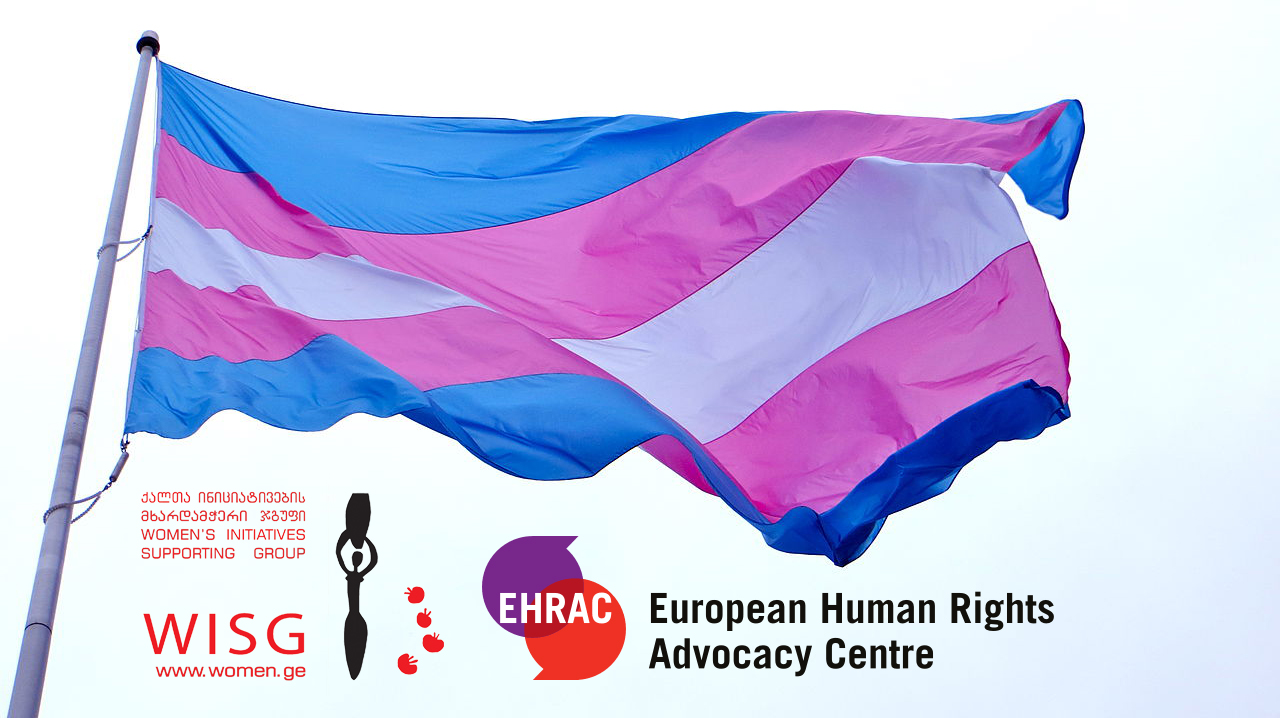 Women’s Initiatives Supporting Group (WISG), in collaboration with partner organisation, European Human Rights Advocacy Centre (EHRAC) represents two trans men in their applications to the European Court of Human Rights (ECtHR). Their cases concern the Georgian authorities’ refusal to recognize their legal gender, which, according to the applicants, violates Articles 3 (degrading treatment), 8 (respect for privacy) and 14 (non-discrimination) of the European Convention on Human Rights (ECHR). Both Mr D’s and Mr K’s applications to change the gender marker in their official records to reflect their male gender were refused by the Georgian authorities, who said that they must undergo gender re-assignment surgery before being allowed to do so: such surgery is not provided by the state healthcare system or required by law. It is also contrary to recent case law of the ECtHR.[1]

Applicant A.D.’s case was sent to the court on August 1, 2017 and A. K.’s on November 10, 2017. According to the applicants, their social roles are that of men and the entry “female” in their IDs forces them to disclose their trans status whenever they show their identity documents. This situation creates a lot of obstacles for them in society, as the stigma towards trans persons is very strong. A.D. and A.K. say that the fear of “forced coming out” puts them under constant stress and negatively affects their lives. In their cases before the Court, they argue that their right to respect for their private and family life has been breached, as they should not be required to undergo surgery in order to be recognized in their gender and that Georgia has failed to put in place a clear legal framework to allow them to amend their identity documents. They also argue that they have been subjected to degrading treatment and discriminated against on the basis of their gender identity as a result of the Georgian authorities’ failure to change the gender marker on their official documents.[2]

On September 6, 2018 the ECtHR communicated both applications and joined the cases.[3] These are the first cases from Georgia before the Court which concern the rights of trans people to legal gender recognition.

Women’s Initiatives Supporting Group (WISG) deeply regrets systemic problems in Georgia due to which LGBTQI persons in particular face barriers to properly exercise their rights and freedoms. The existence of such problems is on the one hand supported by societal stigma and stereotypes towards LGBTQI persons; and on the other hand, the state neglects specific needs of the members of the group.

Trans people living in Georgian are deprived from the most important recognition. They cannot change the gender marker on their IDs since the mechanism for legal gender recognition (LGR) is not regulated by law. As of today, some trans people are forced to undergo unwanted, medically unjustified, expensive and life-threatening procedures in order to change their gender marker.[4]

As a result of the failure to recognize their legal gender, trans people become victims of discrimination and have their right to respect for this privacy violated every day and when they are asked to show their IDs. This means that trans people are in unequal conditions at the times of employment, service delivery and participation in daily life. All of this makes LGBTQI group members particularly unprotected and makes them vulnerable to homo/bi/transphobic violence and discrimination.

Moreover, the services at the individual medical facilities remain inaccessible for trans persons. The problem of accessibility is conditioned by the price of procedures that the members of the community cannot often afford; on the other hand, they do not have equal possibilities like other citizens to use financial support on the medical procedures available through the state health care programmes and the costs of the certain procedures that are available in Georgia have to be fully borne by the patients.[5]

On 17 April 2018 the Government of Georgia adopted the Human Rights Action Plan 2018-2020.[6] The document is a comprehensive national document to protect and ensure human rights in the State. The government announced that the Action Plan should include a specific chapter on Gender Identity and Equality. The chapter should have been reviewed in order to develop and reflect more adequately the rights and freedoms of LGBTI persons living in Georgia. WISG was one of the organizations which participated in the consultation process organized by the Human Rights Secretariat and provided relevant evidences to identify and prioritize key issues that lacked the definitions and wordings in the previous Action Plans. WISG strongly encouraged the Secretariat to include Legal Gender Recognition and protocols/clinical guidelines for trans healthcare in its National Action Plan. However, the approved Action Plan does not cover issues of sexual orientation, gender identity and expression (SOGIE) nor does it include a separate chapter on gender identity and equality, as originally envisaged.[7]

The Women’s Initiatives Supporting Group (WISG) is a non-governmental, non-profit-making feminist organization defending the human rights of lesbian, bisexual women, trans and intersex persons in Georgia. The main goal of the organization is supporting the formation of a harmonious society based on principles of social justice by empowering women, which shall ensure full involvement and equal participation in social, political, cultural and economic life for all women.

To achieve its objectives, the organization shall carry out its activities in the following areas: a) Promoting the empowerment of women at personal as well as inter-personal levels; b) Securing equal rights and opportunities for women through advocacy and lobbying; c) Popularization of ideas of equality, feminist vision, rights of women and minorities, and building respect towards their rights among the society. See here: www.women.ge

[4] There is no official definition or explanation of how we should understand “change of gender” or what are the specific documents, that the applicant is required to present in order to achieve legal recognition of his/her gender. According to the existing practice in the civil acts registration body, in case of fully underwent medical procedures of gender reassignment, a person is entitled to change his/her personal data in the official documents, which is a long process. Before the actual surgery a trans person has to be observed by psychologists and sexologists. These observations last for more than a year. At the end of the process the special committee has to conclude on whether or not the applicant is a “true transsexual” and then issues a relative document. Only after this document is issued a trans person has the right to undergo the gender reassignment surgery. One more thing to do before the surgery is the hormone therapy. Consequently, irreversible sterilization, hormonal treatment and preliminary surgical procedures are mandatory procedures which one has to go through in order to be able to obtain new documents.

[5] Certain category of medical operations is funded or co-funded by the state based on the Decision of the Georgian Government No.7734 (which approves State Healthcare Programmes for 2011). The main criteria for selecting which services fall under this category is the importance of the disease and low or special social status of the beneficiaries. However, despite its high social importance, gender reassignment surgery is not included in that category of medical services. Thus, gender reassignment procedure is not covered under any kind of insurance.