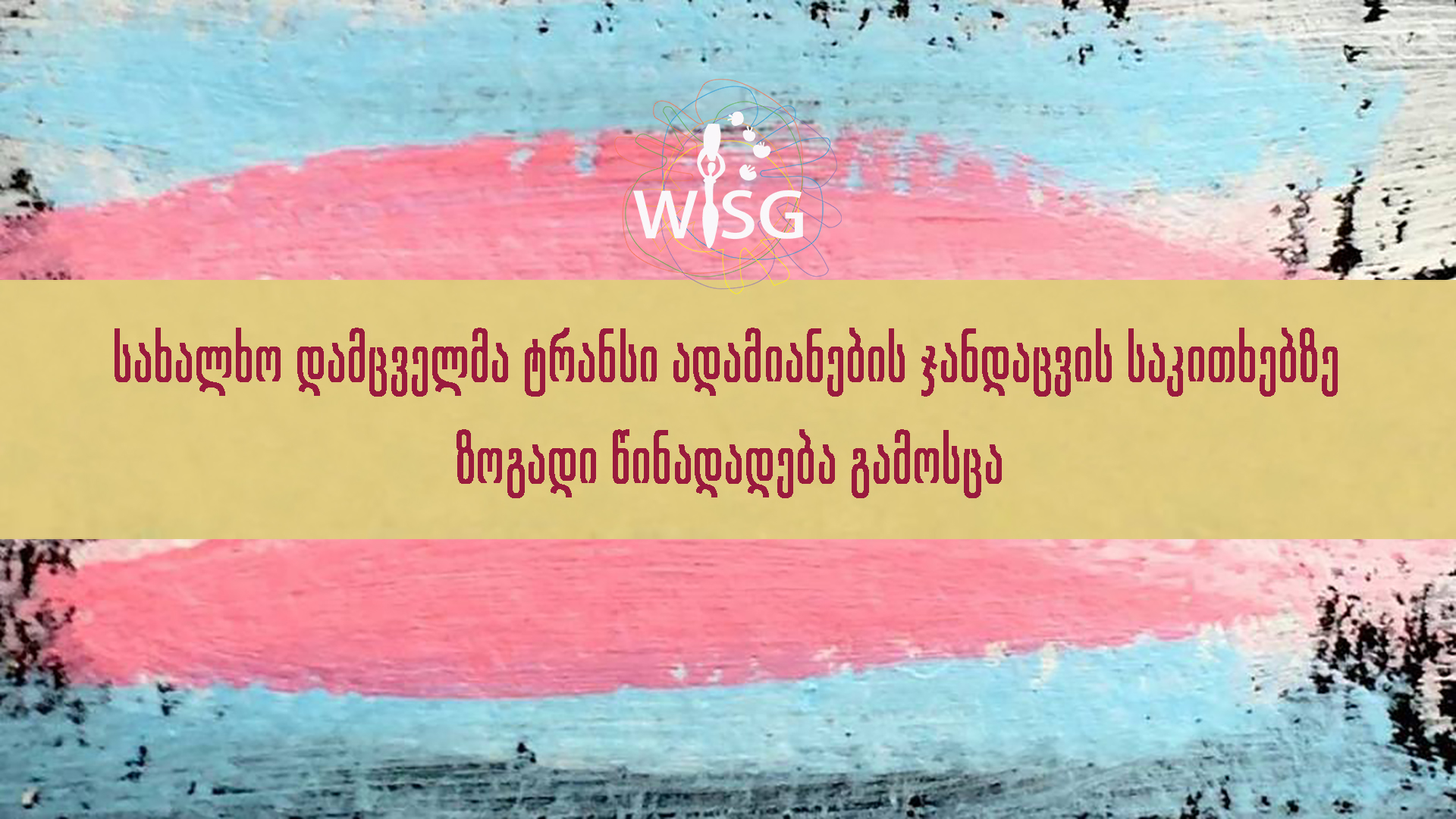 The Public Defender of Georgia has reviewed the cases of five trans* persons, who applied to the PDO in 2018 and whose interests were represented by the Women’s Initiatives Supporting Group (WISG). The applicants maintained that the unsubstantiated rejection of the Referral Commission to finance their diagnostic procedures constituted discrimination on grounds of gender identity. The Public Defender did not identify discrimination; however, a general proposal was issued to the Ministry of Internally Displaced Persons from the Occupied Territories, Labor, Health and Social Affairs of Georgia to establish a working group to develop state-level trans-specific medical guidelines and protocols in the absence of which trans* persons cannot exercise constitutionally guaranteed rights to quality medical care and informed consent to receive such care.

In the case of each applicant, WISG provided medical reports from an endocrinologist and sexologist prescribing diagnostic procedures to determine tailored hormone therapy.

The state does not have national clinical practice recommendations (guidelines) for trans-specific health care or a state standard (guideline and protocol) for clinical management, which would define a list of diagnostic and subsequent medical procedures for transition.

The only document in Georgia that regulates trans-specific care, namely, sex-reassignment surgery, is also flawed. This refers to a recommendation issued on 20 February 2008 by the Georgian National Council of Bioethics, which states that “the duration of medical supervision and the selection of medical examinations shall be governed by professional standards defined by relevant field specialists”. The document does not specify the standards and regulations applied by specialists in this particular field, and, in general, which specialists are considered “field specialists”.

In her letter of recommendation, the Public Defender notes that the absence of guidelines and protocols should essentially be considered in conjunction with the established practice of discriminatory and human rights violations, which defines sex-reassignment surgery as an essential prerequisite to changing the gender marker in identity documents.

The document submitted by WISG to the PDO notes that “[t]he state obligates trans* persons to undergo medical interventions associated with sex reassignment without defining the standards of such procedures or a quality control mechanism”.

The Public Defender advises the state, and in particular, the Ministry of Health, that in the absence of standards, guidelines and protocols, the latter is in violation of trans* persons’ constitutional rights as a welfare state that should provide its citizens with quality health care and social security.

In the report[1] on his visit to Georgia, the Independent Expert on protection against violence and discrimination based on sexual orientation and gender identity, Victor Madrigal-Borloz states that psychological, endocrinological and surgical services for gender affirmation in Georgia are unregulated and there are no clinical guidelines with regard to gender affirmation procedures. The Independent Expert recommends that the Georgian state adopt clinical guidelines on trans-specific medical procedures in line with international standards.

In its report[2] on Georgia adopted in 2015, the European Commission against Racism and Intolerance (ECRI) issued a recommendation to develop clear guidelines for gender affirmation procedures and their official recognition.

The publication developed in 2018 under the auspices of the Gender Equality Council of the Parliament of Georgia, Gender Equality in Georgia: Barriers and Recommendations[3], also includes recommendations to the then-Ministry of Labor, Health, and Social Affairs to develop clinical guidelines on trans-specific health care.

The adoption of trans-specific medical services, guidelines and protocols is also outlined in the Human Rights Action Plan[4] of the Georgian Government for 2018-2020, which was approved in February 2020; however, the relevant working group is yet to be established.

The Public Defender also notes that in the absence of localized and adapted clinical protocols and guidelines, health care professionals that provide specific services to trans* persons are required to adhere to guidelines developed for medical, social or other relevant contexts in other countries and thus, do not address needs specific to the Georgian context.

This position is shared by the World Professional Association for Transgender Health (WPATH), which, in its “Standards of Care”[5] manual notes that most of the research and experience in the field of trans* health care comes from a North American and Western European perspective; thus, WPATH emphasizes the significance of adaptations of the Standards of Care to local contexts.

“In the absence of relevant standards, guidelines and protocols, medical professionals will not be able to refer to any document/standard when obtaining informed consent. A patient’s informed consent, in particular prior to an irreversible medical procedure, is an essential condition for receiving medical care. The legitimacy of such consent can be called into question when there is no national standard that health professionals can rely on when informing and obtaining consent from a patient. It is thus unclear based on which treatment method or experience the health professional has obtained consent,” – states the Public Defender.

The Public Defender’s report states that the five trans* persons mentioned in WISG’s application, “as well as other trans* persons living in Georgia require medical care. The state, however, does not take responsibility for the quality control of these services. From the international standards and national legislation mentioned above, it follows that the state has an obligation to provide a mechanism for assessing the quality of medical care required by the relevant group of people.”

Based on the above, the Public Defender has addressed the Minister of Health with an official proposal, urging the latter to:

Establish a working group to develop national clinical practice recommendations (guidelines) for trans-specific care and a state standard (protocol) for clinical management, which will outline both medical and ethical aspects of trans-specific health care, as well as mental and social support elements preceding and succeeding the medical procedures;

Ensure maximum involvement of trans* persons and other interested persons/organizations in the development of the clinical guidelines and protocols.

WISG expresses the hope that, together with health professionals, the working group established by the National Council to develop, assess, and introduce national recommendations (guidelines) for clinical practice and the state standard (protocol) for clinical management, will also involve trans* persons and community organizations.

[1]Report of the Independent Expert on protection against violence and discrimination based on sexual orientation and gender identity,
https://undocs.org/en/A/HRC/41/45/ADD.1?fbclid=IwAR1uGxuJ6lMh0KqfYO9D1vUNMQv4SWO0LSiwgZcH7UQCeSdylM71tmToyZo