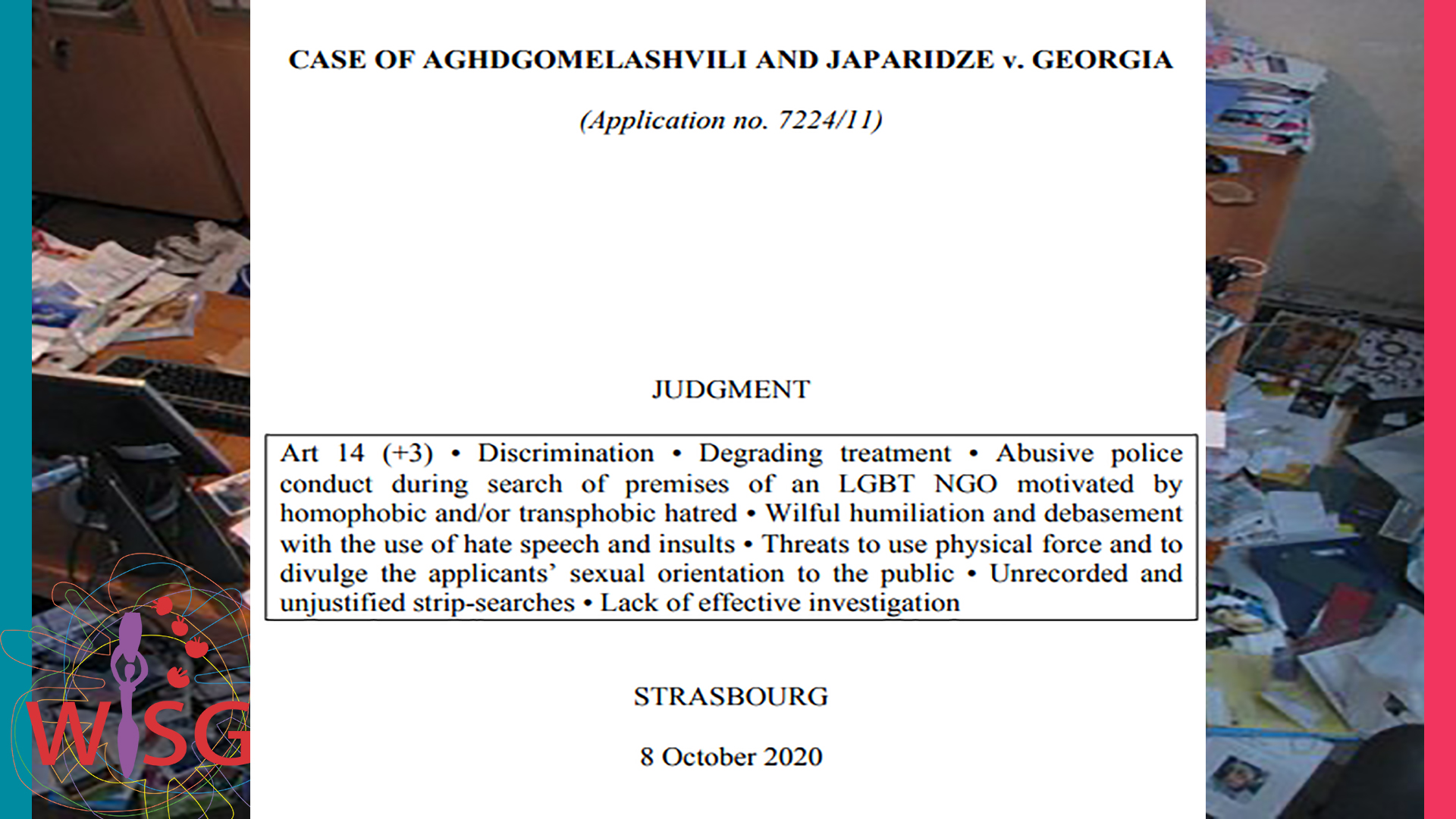 On October 8, 2020, the European Court of Human Rights rendered a judgment in the case of “Aghdgomelashvili and Japaridze v Georgia”[1]and found a violation of the substantive and procedural aspects of Article 3 in conjunction with Article 14 of the Convention. This ruling implies that the conduct of police against the applicants, their friends and supporters, has been deemed as inhuman treatment, and implies that the state has failed to conduct a proper investigation.

In December 2009, based on operative information, a group of law enforcement officers conducted a search at the office of “Inclusive Foundation”, where one of the employees was apprehended for possession of narcotics. Aside from staff, up to 20 LBT community members were also on site during the search. The group was preparing for a closed event, organized by the Women’s Initiatives Supporting Group (WISG) annually since 2007 (WISG, which worked directly with lesbian, bisexual and trans* women, frequently used the premises, as “Inclusive Foundation’s” partner organization, to hold events).

During the operation, police officers locked the applicants and other LBT community members in a room for several hours, having confiscated their personal belongings and telephones. After the officers became aware of the mandate of the organization, they began insulting, ridiculing, and threatening the community members. Later, female police officers took community members to the bathroom and coerced them to undress citing the need for a body search. The officers did not draw up a report after the search. Moreover, the officers’ conduct led the applicants to believe that the purpose of the procedure was to humiliate them.

According to the applicants, the actions of the police officers reached a point of inhuman and degrading treatment that provided sufficient grounds to claim a violation of Article 3 of the European Convention on Human Rights, as well as refer to the state’s non-fulfillment of its positive obligations, which manifested in an inefficient investigation. On January 8, 2010, the applicants filed a complaint with the prosecutor’s office, which yielded no response. Despite several appeals, the case was not followed through, and no action was taken other than the interrogation of the applicants. The prosecutor’s office contacted the applicants only after the Strasbourg court accepted the case in 2011. The complaint for the ECHR was drafted by Article 42 of the Constitution (attorneys Ana Tvaradze and Lasha Tchintcharauli) and INTERIGHTS (attorneys Sopo Japaridze and Joanne Sawyer). At a later time, the European Human Rights Advocacy Centre (EHRAC) (Prof Philip Leach) also became involved in the proceedings. The success of this case is largely due to the tireless work and dedication of these attorneys.

The Impact on Community Members

The 2009 police raid directly affected up to 20 women, who were taking their first steps towards the establishment and mutual empowerment of the LGBT community in Tbilisi. At the time, there were nearly no LGBT-friendly safe spaces for community meetings and events in the city. Such closed gatherings were essentially the only opportunity for community mobilization.

Despite widespread homophobic societal attitudes, and the risk of police pressure and threats, the community members still gave anonymous testimonies to INTERIGHTS representatives leading the case.  Moreover, despite the traumatic experience, the group members expressed unprecedented solidarity towards each other and the employees of WISG. The connection between these women was not severed. The sense of solidarity and justice was upheld and the fight against systemic violence persisted. This was the first victory – the readiness to maintain a collective principled endeavor, regardless of what happened. WISG not only did not stop working on these issues or supporting LBT community members but has further expanded and intensified its efforts in this area.

Given the context at the time, the dangers associated with stated positioning in this case were well understood. Based on discussions and agreement, it was decided that this responsibility while preparing the ECHR lawsuit would be assumed by two women. Therefore, after a 10-year wait period, Strasbourg’s decision bears a transformative significance for both Ms Aghdgomelashvili and Ms Japaridze, as well as those women, whose names are not mentioned in this case, and for the entire LGBTQI community, in whose collective memory the past injustices have finally acquired a name.

What is the significance of this ruling 10 years down the line?

This decision of the ECHR is especially relevant today, as the LGBTQI community has been facing numerous obstacles when appealing to law enforcement agencies. This is reflected in homo/bi/transphobic attitudes from police, the prosecutor’s office, and judicial workers, as well as in the investigation of hate crimes.[2]

Since 2012, the list of grounds stipulated in Article 531 of the Criminal Code of Georgia includes sexual orientation and gender identity, i.e. homophobic and transphobic motive has been qualified as an aggravating circumstance. However, law enforcement agencies have frequently struggled to identify the motive.

A separate problem is posed by homo/bi/transphobic incidents falling under the Code of Administrative Offences, which does not recognize offenses committed on homophobic or transphobic grounds at all.

LGBTQI community members continue to consider the unlawful processing of data on their sexual orientation and gender identity relevant. As a result of a case filed by WISG in 2018, a police officer was relieved of duty due to a forced coming out of a trans* woman.[3]

We will be actively engaged in the implementation of the judgment rendered by the Council of Europe’s Committee of Ministers and will attempt to point the state towards the necessary measures that must be taken immediately in order to prevent such human rights violations in the future.

WISG believes that homophobia and misogyny are social problems. Thus, the state, in cooperation with civil society and community members, will need to develop consistent policies and take effective steps to respond to these problems.

WISG will ensure the translation of the judgment into Georgian and will later hold a public discussion on this case, where all interested parties and stakeholders will have the opportunity to learn more about the ruling and its significance for the LGBTQI community living in Georgia.

[2] At the time, the identification of a homophobic motive in the case was also a problem. As of 2009, Georgian criminal law did not recognize hate motive.